Home      News      Brexit – Where are we today? Implications for North American Markets

Brexit – Where are we today? Implications for North American Markets

By Ty Jadah|2020-02-19T20:19:20-05:00December 2nd, 2019|News & Media|
Though it may sound like a tasty English biscuit, Brexit isn’t something that’s easily digestible after a cup of tea, especially to the economy.
Brexit, the blending of “Britain” and “exit,” refers to the United Kingdom’s withdrawal from the European Union (EU). Following a 2016 referendum, the UK government voted 52% in favor (17.4 million for versus 15.1 remain against) of leaving the EU and a two-year withdrawal process was put forth in March of 2017. The process has been extended three times and a strenuous road has set the current withdrawal deadline for January 31, 2020.
Having joined the European Union in 1973, the United Kingdom would become the first country to ever leave it.

Obviously, when a separation of this magnitude occurs, it has major ripple effects, both immediate and long-term, throughout the UK and parts of the EU’s 27 other member states. From a gross domestic product (GDP) standpoint, Britain is the fifth-largest single national economy in the world. It has the world’s ninth-largest purchasing power parity (PPP), and twenty second-largest GDP per capita, comprising 3.3% of worldwide gross domestic product.

Immediately following its exit from the EU, the value of the British pound dropped to 31-year-long lows, former UK Prime Minister David Cameron announced his resignation, and economies around the globe were collectively struck with uncertainty. 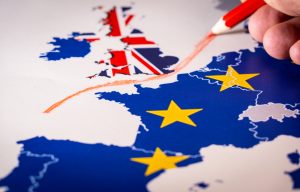 By losing the UK, the European Union’s budget would lose its second-largest market (€11.5 billion in 2015) after Germany ( €14.3 billion, as of 2015). The UK’s departure from the EU would include the customs union. Economists fear this would result in lengthy delays at ports, traffic bottlenecks, and disruptions to commerce routes.

The price and availability of certain foods could be further affected, according to economists, who also fear of potential medicine shortages. Britain’s exit would also eliminate the UK’s tariff-free trade status with the other EU members and its collective no-trade agreement would dissolve. Tariffs would then raise the cost of exports, impacting exporters whose goods would become higher-priced in the rest of Europe.

Tariffs would also impact the prices of imports into the UK as one-third of its food comes from the rest of the EU. Tariffs are currently set at 74% on tobacco, 22% on juice, and 10% on cars. Higher import prices would lower the standard of living for UK residents because of inflation.

A “hard border” with neighboring countries would require all imports to go through customs and those delays at immigration could create food shortages.

Across the pond, the UK is the United States‘ seventh-largest export market and the consequences of Brexit could affect millions of US and British-related jobs.
Since Brexit, the Bank of America has spent upwards of $400 million to transfer its European headquarters to Dublin. The UK’s largest airline, EasyJet, is transferring ownership to non-British Europeans. The British pound is 14% lower than before the referendum, which helps exports but increases the price of imports.

According to the Office of the US Trade Representative, American goods and services trade with the United Kingdom totaled roughly $262.3 billion in 2018, with exports at $141.1 billion and imports at the remaining $121.2 billion, leaving the US with a goods and services trade surplus of $19.9 billion for 2018.
President Donald Trump has been very optimistic regarding a trade deal with the UK, post-Brexit, but economists highlight that US exports to the UK account for 4% of overall US exports in 2018. Still, professionals believe that a trade deal between the US and the UK would have the potential for a modest boost to both economies though traditionally, every trade deal tends not to be equally advantageous.

Economy theorists’ postulate that it is impossible to predict the outcome after an unprecedented deal and believe the main concern is how much US exports would be affected within Europe as a whole in a post-Brexit world. US companies that have European supply chains would become much more vulnerable. For example, think of the car industry, and the North American market’s connection to Britain’s luxury cars. Consumers would move away from premium brands and focus more on cheaper alternatives due to elevated prices and steep tariffs on both sides.

When it comes to the Great White North, the United Kingdom is one of the most important export destinations for Canadian goods and a pivotal destination of Canadian foreign direct investments. The UK is Canada’s third-largest export market, with its top export being gold.

By leaving the EU, the UK and Canada would lose their most glaring trade connection, the Comprehensive Economic and Trade Agreement (CETA), a free-trade agreement between Canada, the European Union and its member states. Even though Canadian Prime Minister Justin Trudeau has lobbied for a “seamless transition” from CETA to a Canada-UK trade agreement. Regardless, Canada would have to negotiate a new bilateral agreement with Britain, as 40% of Canadian merchandise trade under CETA occurs with the UK.

If the cost of exporting goods increases, Canadian jobs could be cut in response to rising costs. A drop in profitability could also impact foreign investment in Canadian businesses.

Britain’s current Prime Minister, Boris Johnson, who ran his election on the slogan “Get Brexit Done”, has publicly stated that the UK will leave the EU by January 31, 2020 (provided he is re-elected, with a majority in the House of Commons this might actually happen). Mr. Johnson insists that a trade deal with the European Union can be achieved by December 2020, a timetable lauded by most political pundits as highly ambitious and who argue that unless Britain agrees to extend this timeline, it could prompt an economic crisis if the UK left the EU without a deal and defaulted to World Trade Organization rules.

To add to the disorder, Mr. Johnson’s tenuous hold as prime minister would most likely face a political crisis if he even considered an extension, as it would then alienate his Tory supporters. And so, the world watches expectantly for the UK general election results on December 12, 2019, which will dictate the next phase in the Brexit saga.

Based in Montreal, Research Consultants International is a specialized market research firm that provides customized lead generation and business intelligence services for economic development organizations and regional promotion agencies, intended to identify and capture FDI and direct investment opportunities. We position Economic Developers in front of corporate decision-makers that are seeking to expand or relocate their businesses to new geographic locations. We are focused on helping our clients create important business relationships that will serve to grow awareness of their region, promote its economic strengths and attract direct investment.